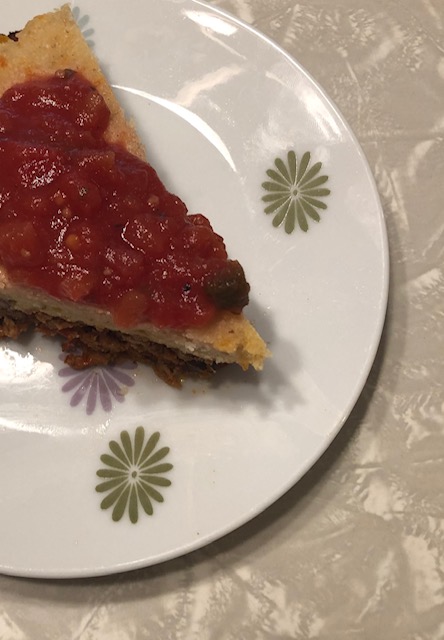 How have I lived on this earth for so long and not eaten (or MADE) tamale pie? I love Mexican food and tamales are one of my favorite dishes. My husband has made homemade tamales before, but I haven’t tried my hand at them. I tend to shy away from recipes that seem too labor and time intensive. When you work and taxi 2 daughters, you want dinner on the table quickly.

I found this recipe online and didn’t follow it. I’m known for tweaking recipes based on what ingredients I have on hand and what I think would be a healthier substitution. In this case, I subbed lean ground turkey for ground beef and used corn oil instead of melted butter. This cuts the fat content down. Another option to reduce the fat content is to use 2% milk shredded cheese in the tamale top. I made 1/2 of what the recipe called for, which made 1 perfect tamale pie.

In addition, I added a 1/2 cup of black beans which added fiber and texture to the dish. I didn’t have any tomatoes with green chiles on hand, so used a cup of prepared salsa. There were a handful of spices on the list including chile powder, cumin and salt. I opted to use a small packet of Goya seasoning, which covered all of the seasonings. I did toss in some oregano, because it gives dishes a little earthly flavor!

You could make this dish completely vegan by using 2 cans of black, red or kidney beans in place of the meat and leaving out the cheese or using a cheese substitute (such as Dayia). Vegetable broth may be used in place of chicken broth.  Below is my recipe. I hope you enjoy it. Ole!

Ingredients (for the base)

1 cup prepared salsa (+ extra for serving over the pie)

For the tamale top