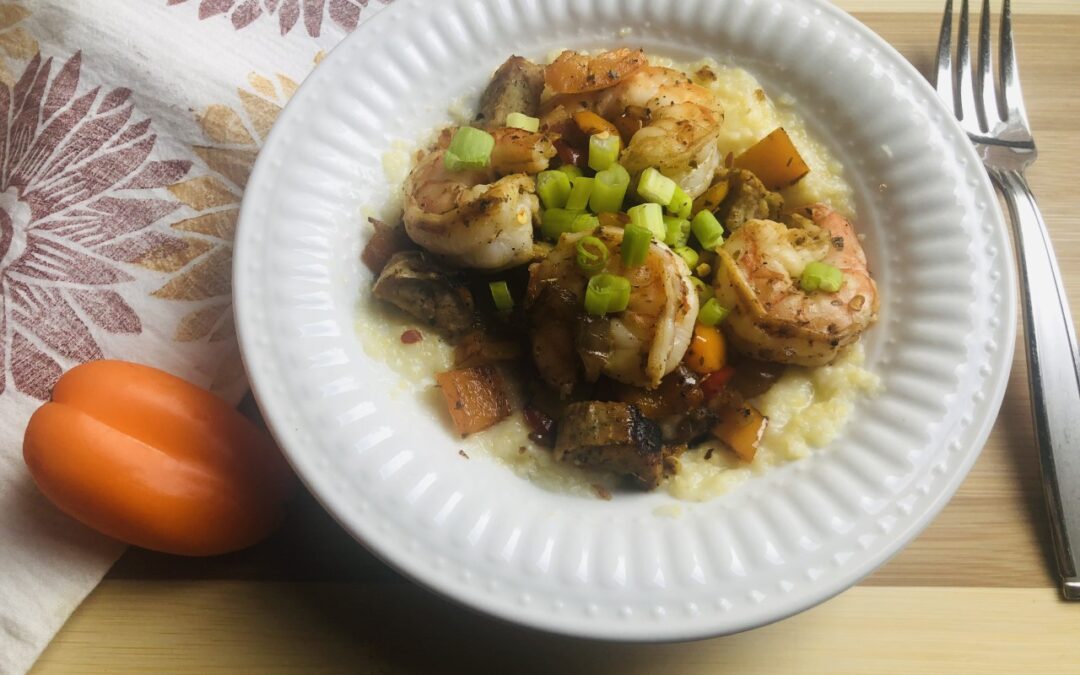 Did you know that grits may have been named by Native Americans? The word grytt means “coarse meal” or in this case, “ground corn meal”. Grits are a Southern porridge made from ground corn meal that’s often used in place of rice or potatoes.

I don’t remember the first time I tried shrimp and grits, but I have been a fan ever since. Grits are often used for breakfast, which is why you’ll often seen this dish on the breakfast or brunch menu. But you can enjoy this dish any time of the day.

Grits are a versatile, gluten-free grain with a creamy texture and savory taste. You can buy them in instant or slow cooking form. I like the instant grits when I want something delicious and fast.

Shrimp cooks up very quickly, too. I tend to buy frozen shrimp and thaw it out the day I’m going to use it. I rinse it in cold water for a few minutes then let it sit for about 20 minutes before removing the shell and deveining the shrimp.

Shrimp is a good source of protein as well as iodine, magnesium, zinc and other minerals. While it is a source of dietary cholesterol, it is relatively low in total and saturated fat.

I love the combination of creamy grits with savory shrimp and veggies. Most shrimp and grits recipes use bacon or some form of sausage as well as cheese. I left out the cheese and added more veggies to mine for more color and texture. My recipe used garlic chicken sausage from Trader Joes, which was plenty salty and garlicy. The recipe didn’t need more of either.

Unfortunately, I am the lone shrimp consumer in my house. Consequently, my recipe makes 2 servings- both for me! You can certainly double or triple the recipe if you’ve got a crowd to feed.

Makes 2 servings- can be doubled or tripled for a larger crowd.